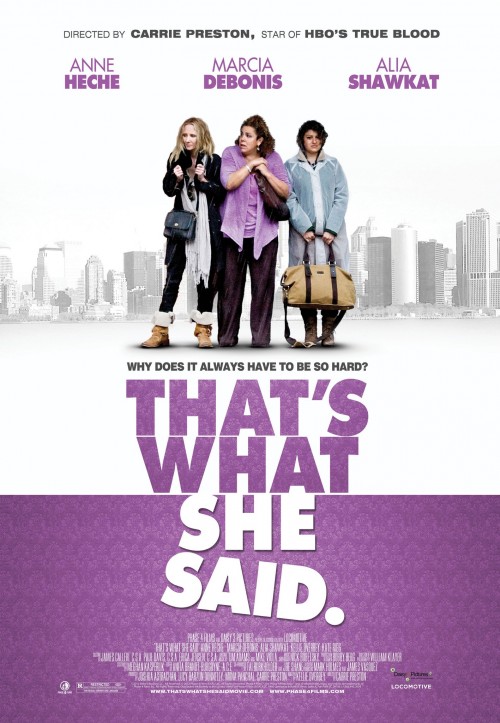 3.8
Bebe's got a big date on the horizon in That's What She Said, an all-female comedy about dating and friendships. Bebe's trying to get ready for a second date with a man she hopes is her Prince Charming. Her best friend, DeeDee (played by Anne Heche) kibitzes, chain smokes, and generally appears to be permanently hung over. Many sight gags and jokes about yeast infections ensue, as they charge all over the city, getting Bebe prepared. Along the way, the pair runs into their nymphomaniac friend, Clementine. Obsessed with her vibrator, and upset with her boyfriend, Clementine also reveals that she has the unique ability to achieve orgasms in subway cars. Madcap adventures ensue as the trio has a run-in with New York City cops, suffers through a deluge of rain, and finally gets Bebe to her hair appointment in a Chinatown salon. There, it quickly becomes clear that the stylist doesn't understand her client's instructions. What's a girl to do when it's this hard to get ready for the date of a lifetime?
MOST POPULAR DVD RELEASES
LATEST DVD DATES
[view all]