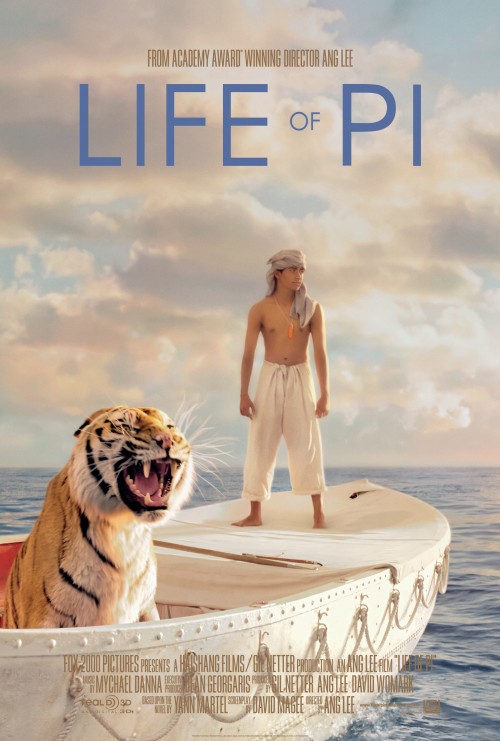 PG Action, Adventure, Drama
The products below contain affiliate links. We may receive a commission for purchases made through these links.
POSTERS
‹ ›

7.9
Based on the bestselling story written by Yann Martel, The Life of Pi begins when a Canadian writer visits an Indian storyteller named Pi Patel and asks him to recount his personal history. Pi begins his story in Pondicherry, India, where, as a child, his father owned a zoo. The zoo business fails and Pi learns that his family is moving to Canada with the menagerie. The family climbs aboard a Japanese cargo ship. Pi says that there was a storm, the ship is shipwrecked, and Pi is forced to survive in a lifeboat. A few of the zoo animals escaped the shipwrecking and made their way into the lifeboat, too, including a hyena, zebra, an orangutan, and a terrifying 450 pound Bengal tiger named Richard Parker. Realizing that he needs to feed the tiger to survive, Pi builds himself a small raft and goes fishing regularly. After a series of mishaps, Pi can no longer live off of just fish, so he leaves the raft and joins Richard Parker again in the lifeboat. Weeks after the incident, when Pi and the tiger at their weakest, the pair comes across a floating island with a forest of edible plants and drink water. They spend the day there, regaining their strength. The island ends up being uninhabitable and Pi and the tiger are forced to leave when night falls. They eventually reach Mexico, where, again weak with hunger and thirst, Pi collapses on the beach while Richard Parker walks off into the jungle without acknowledging him or saying good-bye. A group of people find Pi on the beach and bring him to the hospital, where he recuperates.
MOST POPULAR DVD RELEASES
LATEST DVD DATES
[view all]