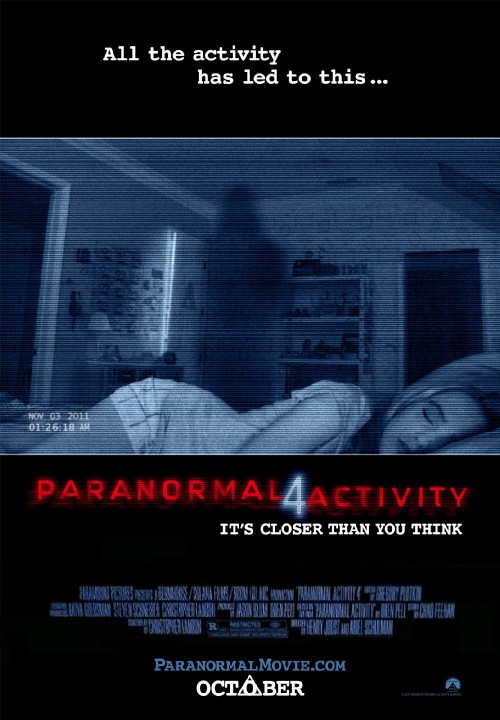 4.6
In Paranormal Activity 4, the fourth installment of the spine-tingling series, strange happenings start to occur when a woman and child move into a neighborhood five years after the disappearance of Katie and Hunter. Filmed from the vantage point of Alex, a teenage girl who lives across the street from the new family, the story begins when the mother who recently moved into the neighborhood becomes ill and is taken to the hospital. Since her son, Robby, has nowhere to go, Alex's mother decides to take him in until his mother recuperates. From that point on, strange things begin to happen that are eerily reminiscent of the first film in the series. A swinging chandelier, doors opening and closing, and "Hunter" written on the wall in crayon are some of the more benign things that first give Alex and her boyfriend pause. But once things start to escalate, she and the pair start to do some investigating, and begin to believe that something is very wrong with her younger brother's new playmate Robby. As the activity turns from creepy to violent, she is in a battle not only against the evil spirit in the house, but to convince her family to believe her, as well, before it's too late.
MOST POPULAR DVD RELEASES
LATEST DVD DATES
[view all]